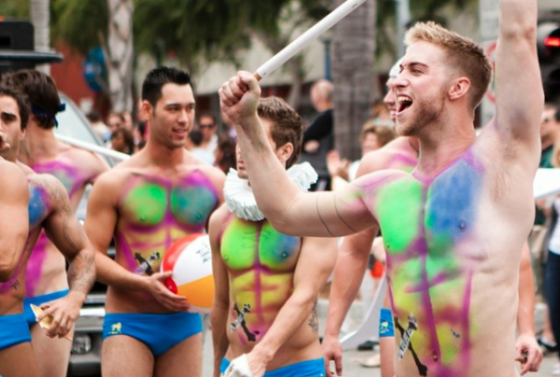 And have you noticed they’ve taken the “gay” out of pride?

By: Rick in Chicago

I used to love to go to gay pride events. I’d go to picnics, parades and even street fairs.

As a gay man, these types of venues afforded me the chance to be myself and without having to worry about being judged.

And to keep it real, part of the fun for me was seeing the bizarre, surreal and different.

Sure, there was always the chance of seeing some hot guy and having him see me too. Not that it happened frequently.

But this last Pride, I felt like an outsider looking in – a virtual foreigner in my own metaphorical home.  I kept wondering, where have all the gays gone?

And then it dawned on me. Nobody calls it “Gay Pride” anymore. Instead, hetero-America has taken it over and the fricking thing is just called “Pride”.

Isn’t that messed up? No wonder #heterosexualprideday has been trending!

I knew I would be close to attending my last Pride event last year when I saw a giant ass Jesus floating down the street.

Hey, I’m down with Jesus so don’t get me wrong. But was it really necessary for his presence to be that large – to the point that he injured himself on a light post?

Yes – that actually happened a few blocks after this picture was taken.

Probably the worst part for me was having the sudden realization that everyone around me was straight. Well, not everyone but most of them. They were drinking and hollering and breeders yelling things out to the old ladies in the parade like:

Hey – show us your tits!

I’m not kidding, that kind of crap was actually going on. And I’m not even going to start in on the hideous amount of corporate sponsors that have taken over most of the events. Every airline, bank and grocery store has a place in the lineup.

And did you notice that Pride has become nothing more than a venue for politicians to suck up to the gay community?

Whatever – I know what you are thinking. We’ve been wanting this for years, right?

Well, maybe that’s true but did you ever think it would come to this? Pride has transformed over the last few years into a major party fest that that has been taken over by straights.

Gone are the days where most of the floats were LGBTQ advocacy groups – or hot shirtless men parading around in bikinis.

It all seems like a distant memory, doesn’t it?

And did you see the Adidas LGBT Superstar Pride shoes? Never mind that it looks like someone ate a bad burrito and threw up on them.

Come on, would you really run around town in those?

I looked real hard and couldn’t see where the company used any of the money proceeds profits for LGBTQ related causes.

Were they just adopting the rainbow colors to endear themselves to the gaytopia?

But they aren’t the only one getting all “pride” every summer.  Tons of other companies are at it too.

At least a few of them offered some of what they took in as a donation to LGBTQ causes. American Eagle and Levi’s come to mind.

Should we talk about the male celebs who so many in our tribe faun over? Ever notice they seem to show up at our events around the same time they are about to drop a movie or album?

No offense Mr. Nick Jonas, I love you but let's get real.

And where was Channing Tatum this year? I'm just asking.

I guess my point is that corporate America has invaded pride and brought along straight America with it.

All of this sucks because GAY PRIDE used to mean something. It was a chance for all of us as a queer community to advocate for ourselves and the people we love.

At least we still have Pride history in October. But there aren’t that many people into that one and goodness knows it’s effing too cold to run around with our shirts off.

I know there are still a few cities left to celebrate Gay Pride after June.