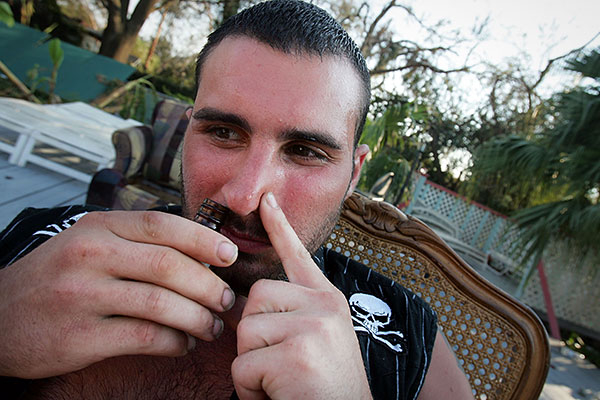 I lost partial vision and was temporarily blinded by a bottle of poppers. Thankfully, there was no permanent damage.


Who would have thought hooking up with poppers could potentially lead to blindness – at least temporarily.

A few years ago, when I was 25 and still in community college, I decided to fire up Grindr on some random weekend because I was feeling horned.

I happen to live in a fairly large metropolitan area and hookups aren’t that difficult to make happen.

It’s not like I’m a super stud or anything – just an average looking gay guy that works out a few times a week. Some people describe me as an otter with blue eyes.

So around 10 o’clock that night, a nice looking guy named Nick hit me up. He was pretty well built and seemed fairly cool. We talked about the usual – you know – what all are you into – are you a top or bottom – when are you free.

That evening, I was kind of just looking for something basic and quick and it turns out he was too. What sold me on going to his place was that he wasn’t into PNP, which still seems to be a problem in our community.

Minutes later I was out the door.

When I arrived at his apartment just a few blocks away, it was about what you would expect for a guy in his early 20’s. A small, windowless studio that looked like a tornado had ripped through it.

He warned me during our text that his place was a mess. I didn’t care because he was hot – with tats and a hairy chest that just got me going.

We made some small chit-chat talked about the neighborhood and the unusually warm weather for that winter. One thing led to another and before I knew it we were on his bed, doing our thing.

And speaking of the bed …his was a twin sized one. I wouldn’t doubt it if it was the same bed he had been sleeping on since he was in grade school because the entire thing looked kind of rickety.

It had old, wooden legs and the entire thing creaked whenever you moved.

So there I am laying back, letting him lollipop me and enjoying it. At some point, he pulled out a brown bottle and took a deep ass hit … and then handed them to me.

I could tell right away they were new because it had that extra kick new bottles always do. Know what I mean?

I guess I was feeling comfortable because he wanted to get inside of me. A little lube here and a condom there and before I knew it my legs were up in the air.

While he was doing his thing to me and my head was knocking up against the headboard, I decided to do another hit of poppers. Stupid I know but I’m just telling you what happened.

He did pause for a moment to let me take a sniff but something gave way. All of the sudden, there was an enormous crash as the entire front side of the bed collapsed onto the floor and went THUD!

And guess where the poppers I had been sniffing ended up? Yep – down my nose and in my mouth. Worse, a huge wave of it splashed into my left eye.

Between the burning sensation in my nostrils and the fiery pain burning up my eye socket, I thought I was going to die.

On top of that, I was also choking big time because the spillage had irritated by throat lining.

I need to get some water in it right away!”

He grabbed me by my hand and guided me to his restroom, which even partially blinded I could tell was a freaking pigsty. I didn’t care at that point because I just wanted to wash the poppers out.

His sink was too small to fit my head under and so without asking, I turned on the faucet in his shower and jumped in. I can remember the cold water running down my face and body as I just stood there, wondering if I had been seriously scorched.

I kept trying to open my eye to irrigate out the chemicals but I couldn’t tell if the thing was shut closed or open.

That is until I figured out something that still freaks me out.

My eye was open as the water beat down on it. The problem happened to be that I just couldn’t see out of it. I could feel the H20 touching it but I had zero vision – just a hazy white-black.

Thankfully, my right eye was working just fine so I could at least fumble around.

Once I got out of the shower, I wiped away the condensation from this Nick’s medicine cabinet mirror to assess the situation. All I can tell you is that my left eye was bloodshot red – almost all of it. You could see a little blue but not much.

At this point, I was really freaking out and just wanted to get the hell out of this guy’s place. He kept apologizing and saying, “Oh my God – Oh my God, it looks really bad – I’m sorry man, I’m sorry. I just fixed the bed last week!”

He told me a hospital was just 2 blocks away and offered to go with me. I know I was being a bitch but I told him I could manage on my own.

Somehow, I got dressed and found my way out of his place.

Walking to the hospital, I kept my eye covered with a dirty washcloth I had taken from his place. What else could I do? I needed something to cover it up. Plus, it was burning like crazy and tearing badly.

Even with my one good eye, I could tell passersby’s on the street thought I was some kind of walking freak show.

“Look at that guy!” one woman said to her companion as they froze in place while staring from a distance.

I could see the white halo around the lettering of the emergency room not far away. All I could do is put one foot in front of the other as I made my way towards its direction.

That’s when I started to wonder how in the hell I was going to explain to the doctor that I had splashed a isopropyl nitrate into my eye. “Hey doc, some guy was topping me and it spilled?”

Once I got into the emergency room, one of the attendants took pity on me and made me a priority. She didn’t even bother to get my name and just said, “Follow me” as she guided me into an examination area.

A nurse came by later and jotted down a few notes. When she asked what happened, I just told her the truth because at that point I didn’t care. I just wanted the pain to go away and my vision to return.

I was already anxious but became more afraid when she gasped after prying my hand back that was holding the washcloth.

“We need to have the doctor look right now! Just hang on and I will be right back. Don’t be nervous.”

I thought her last comment was just perfect given her reaction.

Once the ER doctor came in and I had retold her what happened, she spent a few minutes examining me and took some pictures with a medical iPad. “It’s for the file – it’s required, she said.

I’m including a photo of what my eye looked like but as a matter of full disclosure, this is not my eye. I'm just sharing to provide a mental picture.

Once she was done, she suggested that we immediately irrigate the eye with a special piece of equipment. To make a long story short, they basically put a cap over your eyeball and then pump liquid through it.

Did I mention a tiny tube gets pushed into your eye? Yep, it does and if that sounds gross that’s because it is. People often ask me if it hurt and the honest answer is yeah – a lot.

Any way … once the doctor felt confident that everything was washed out, she used some type of penlight to examine me again. “It’s still pretty inflamed so I am going to give you an anti-inflammatory. I’ll also give you some anti-biotic ointment to prevent any infections. This is a very bad case of uveitis.”

By the time they released me it was early in the morning. The nurse bandaged my eye with some gauze put on an eye patch over it. They sent me on my way with a referral to an ocular specialist and encouraged me to make contact right away. 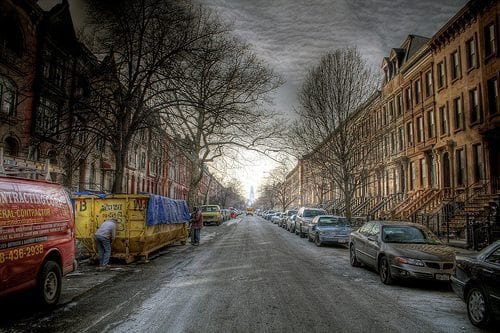 That next day I called the specialist and tried to get in for an emergency appointment. They had nothing open but told me to come in and sit in the waiting area because they often get cancellations. Thankfully, they had some no-shows and I was able to get in to see the doc.

The ophthalmologist undid the bandage from the hospital and took a good long time looking at the condition of my eye.

There was some pain when he did this because it was still tender. The good thing was I could actually see a little!

He explained to me that my eye had become swollen because of the chemical splash and that sometimes the optic nerve will stop sending messages to the brain through the eye if it experiences a trauma. I guess spilling poppers in your eye counts as a trauma, huh?

His recommendation was to use a cool compress and let the eye heal on its own. There was really nothing else that could be done except wait it out. But he felt confident that I would heal and regain full vision.

Just before I left his office, the doctor mentioned that had I not showered and rinsed my eye out, I could have lost vision permanently. I’ve never forgotten that.

After a few weeks, I fully recovered and my eyesight was back to normal. No harm, no foul I guess. And I did end up messaging Nick at some point and telling him everything that had happened. We ended up hooking up months later but this time at my place and without nitrates. Just being honest.

Poppers, apparently, can cause serious vision loss and even blindness according to doctors. I'm not saying that to scare you by the way. Just mentioning because I didn't know any of this until my accident.

If you do use them – here is my advice. Never do sniff when you are lying on your back or in any position where you have to prop up your head. And never do them while someone is actively banging you – ever.

Oh – and it doesn’t hurt to double check the sturdiness of your trick’s bed!

Did it anything interesting really happen to you? Why not make your pitch and share your story with readers?