It was my first sleepover at his place. I ended up trashing his mattress and staining our relationship.

By: Aiden in Houston

When you reach the point in a new relationship where the guy you’ve been seeing invites you to his place for a sleepover, it’s kind of a big deal.

For me however, one such invite would turn out to be my last. You see it was marked – literally – by something stainful.

Let me set the scene for you.

Not too long ago, I was dating a guy named Jake* who I had met on a gay app. He’s a mid-thirties gym bunny attracted to men who have a similar build. The both of us seemed to have so much in common, like digging old Hollywood movies and binge watching on Netflix.

We were in the very early stages of “getting to know one another”; – the part where you put your best foot forward and desperately try to hide any flaws.

If you are familiar with what I am talking about, you know that there are certain topics that are off limits. Specifically, we’re talking about: mental health issues, family drama, ex-boyfriends and medical problems.

Discussing any one of these things too soon can cause the other party to flee. Sure, it’s a delicate dance that both people partake in. But it’s also part of the fun.

In my situation, dating other guys has always been problematic because of my health condition. You see years ago, when I was in my late teens, I was diagnosed with irritable bowel syndrome, otherwise known as IBS.

While there are worse things to have, I can tell you that when it comes to love and romance, “Irritable Bowel” can really mess things up.

Related: Mucus in your poo: What does it mean?

I won’t go into all of the details about this inflammatory problem except to say that IBS strikes people in different ways. For some, it causes constipation. For others, it can give them a case of the runs.

And if you are like me – it can be a combination of both.

In the past, when I’ve disclosed this problem too soon, it’s acted as a man repellant. A lot of guys just don’t seem to know about IBS. And the ones who do – at least in my experience – treat it like leprosy.

I’m just relaying to you what I’ve encountered.

That’s why I’ve learned to keep my yap shut about “it” during the first couple of dates. In my mind, it’s better to let the guy warm up to you before airing the dirty laundry – no pun intended.

Fast forward to three months ago.

Things started out just great. We did what most people do at the beginning; we met for coffee, went to movies and on occasion, would visit each other’s homes. From time to time, we’d even make out and test one another’s oral skills.

At some point, he must have felt comfortable and asked if I wanted to spend the night at his place.

“Why don’t you come over this Friday around 7 pm? I’ll order dinner and we can watch something if you want?” texted Jake.

I won’t lie – I jumped at the chance because I knew it would be the first time we might move beyond mere mouth action – if you know what I mean – and see how well we fit together.

Jake had previously shared that he was versatile, something I found refreshing. Too many guys these days seem to cling to being a total bottom or top, you know?

Thankfully, that wasn’t the case for him or me. The truth is, I’ve always found joy in playing pitcher and catcher. It’s all about the chemistry.

I’ll never forget how excited I was when Friday rolled around. Before leaving for work, I packed an overnight bag and put in all of my incidentals, including my prescription for Bentyl, which is sometimes used to treat IBS.

At the office, I made sure that I ate a fairly “safe” lunch; Tomato Lentil Soup. You see when you have IBS, you learn which foods are good for you and which ones aren’t. Generally speaking, if you don’t have fiber in your meal, you are asking for trouble.

Just before 6 pm, I went to the bathroom and had a delightful bowel movement. You may be thinking TMI but I’m here to tell you that when you live with this condition, any solid, regular bowel movement is good news.

When I arrived at Jake’s place, dinner had already been delivered. He had taken the liberty of ordering Chinese food, a cuisine we mutually enjoyed.

Later that night, long after we had eaten and watched a movie, we found ourselves in his bed. I’d say for a good hour, we spent time exploring one another’s bodies. It was heaven.

Judging by the way things were going and following his lead, I got the sense that he wanted to bottom.

And so that’s what I did. I shagged him good until he released. Oh, I shot out a few chromosomes too but not until he finished.

That’s just part of being a courteous guest, right?

Up until that point, things had been amazing. We even held one another in our birthday suites and spooned for a bit after our sexy time.

There’s something about the glow of first time sex between two people that makes the moment relaxing, you know what I mean?

But I think that was the problem – I was too relaxed.

The next morning when I woke up, Jake was on one side of the bed and I was on the other. As I watched him sleep, I remember thinking how attracted I was to him and the fun we had the night before.

Suddenly, I began to take in an unmistakable whiff. I had smelled it many times before because of my condition. It was pungent and penetrating.

Instinctively, I took my fingers and started gliding it around my behind. All I felt was wet and goo. When I moved my legs, I felt a squishy sensation.

I can’t describe to you the amount of terror that I felt in that moment. For a good sixty seconds, I became paralyzed in horror.

At some point, I forced myself to quietly get up and tiptoe to his bathroom. Deep inside, I knew I had pooped on myself. It’s just part of having IBS – I don’t know how else to explain it.

I used toilette paper to clean myself and dab up the brown leakage. Then it dawned on me that the Chinese food we had eaten the night before likely contained MSG.

This isn’t a problem for most people but for folks with irritable bowel, it can spell disaster! To make matters worse, I had also forgotten to take my medication.

Bentyl is considered an anti-spasmodic. You see when your colon spasms, it can make you get all gassy and experience diarrhea. To make a long story short, that’s what must have happened to me.

As I stood in front of his bathroom mirror and completely freaked out, I wondered how to proceed. 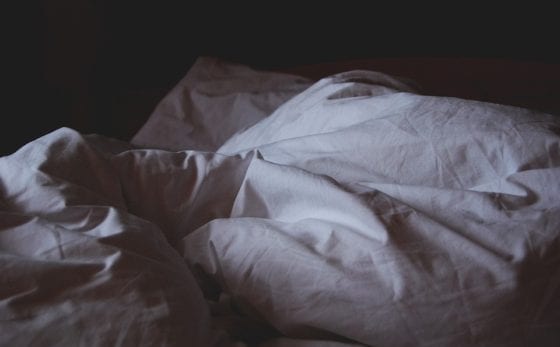 “Should I slip away and leave a note? Should I just be honest and tell him the truth? Is there a corner I can hide in?” I thought to myself.

Ultimately, I decided the best course of action was to simply wake him up and let him know what happened. My heart still races when I think about having to do this.

It was only 6 am – still way too early for anyone to receive such news. But what else could I do?

I walked back to the bed and tapped on his shoulder. “I kind of had an accident next to you. Would you do me a favor and go hang out on the couch while I take care of this?”

He was still groggy when he awoke – but also curious. I winced when he lifted up the white sheets to reveal a tan swirl of poop, drizzly deposited in the indenture where my butt had once been.

In a blur, he jumped out of the bed, causing the headboard to shake.

“Dude, you sh*it in my bed! OMG man you totally crapped in my bed. It’s all over the sheets and probably seeped into the mattress!”

Horrified, I tried to calm him down. I explained to Jake that it wasn’t on purpose and that I had a medical condition that sometimes caused problems.

“And I slept next to that all night long?! Is this a joke?” he added in an angry voice.

Without thinking, I remember scooping up the bedsheet and balling it up. As he stood there with his hand over his mouth, I could feel deep waves of shame pour over my entire body.

Related: Guy takes a poop in a Jacuzzi

“Don’t bother – I’ll take care of it. I think it would be a good idea if you left now.”

Humiliated, I did as he asked. It took me all of 10 minutes to gather my belongings and exit his apartment. One part of me was highly embarrassed but the other part was pissed.

Later that day, Jake called to apologize for his reaction. By that point, I had cooled off a bit and was able to explain to him the joys of IBS.

He was sympathetic and understanding. But I could tell he no longer wanted to pursue our relationship. No, he didn’t come out and say it but his usual, humorous demeanor was totally absent.

Towards the end of the conversation, he added insult to injury.

“I’m going to have to replace the mattress. Can I send you the bill?” he asked.

Maybe it’s just me but I thought that was kind of cruel. In time, I would have paid for the mattress and the sheets. He didn’t need to ask – at least not then.

When I reflect upon what happened, I have to take some of the responsibility. I probably should have told him early in our courtship that I have IBS. At the very least, it might have softened his reaction.

So there you have it. I pooped in my boyfriend’s ex’s bed. Do you think he over reacted? Should I have done something different?

PS: I mailed him a check for the damage. He cashed it according to my bank records. Jake has never called me since. Oh, he also blocked me on the app.

I guess I’ve been ghosted.

Do you have a firsthand story you’d like to share? Make a pitch to our editors today!