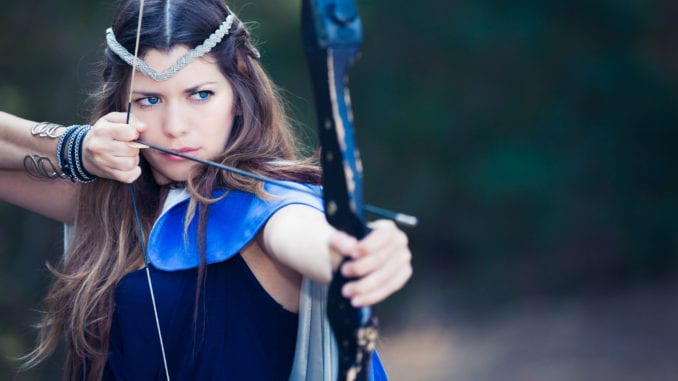 Girls who wear costumes are super-hot, but I can’t get one to go out with me on a date.

Sometimes, I even make my own costumes and dress up for conventions. When I’m there I always see these really hot girls in cosplay outfits. I’ve tried to talk to them. I’ve followed their social media accounts, but nothing ever gets past “hello, my name is Greg.”

I was thinking that we would have a lot in common, but I’m not even getting to that stage with these cosplay girls. Either they think I’m being creepy…BUT I’m not. Or they just don’t seem to like me.

Regular girls don’t like me either, dude. So, I guess I’m super screwed.

Help me get a cosplay girl to like me.

I’m so glad that you reached out with your question. Geek culture is extremely popular, and conventions can easily draw a hundred thousand cosplayers through their doors.

Believe it or not, you’re on the right track by trying to date girls that share your same interests. It’s a great starting point for forming deeper connections, but it’s not the holy grail of chemistry that you might think.

Mutual interests get the ball rolling, but mutual values and beliefs sustain a relationship over the long haul. So, don’t set yourself up for disappointment by thinking that a girl who makes costumes and goes to comic conventions is your match made in heaven, just because that’s what you like to do.

That being said, I will answer your question. You wanted to know how to get a cosplay girl. I’ll show you how. Jack always delivers.

Well, let me break something down for you. There is a Venn diagram of cosplay girls that you need to know about. Check it out right here: 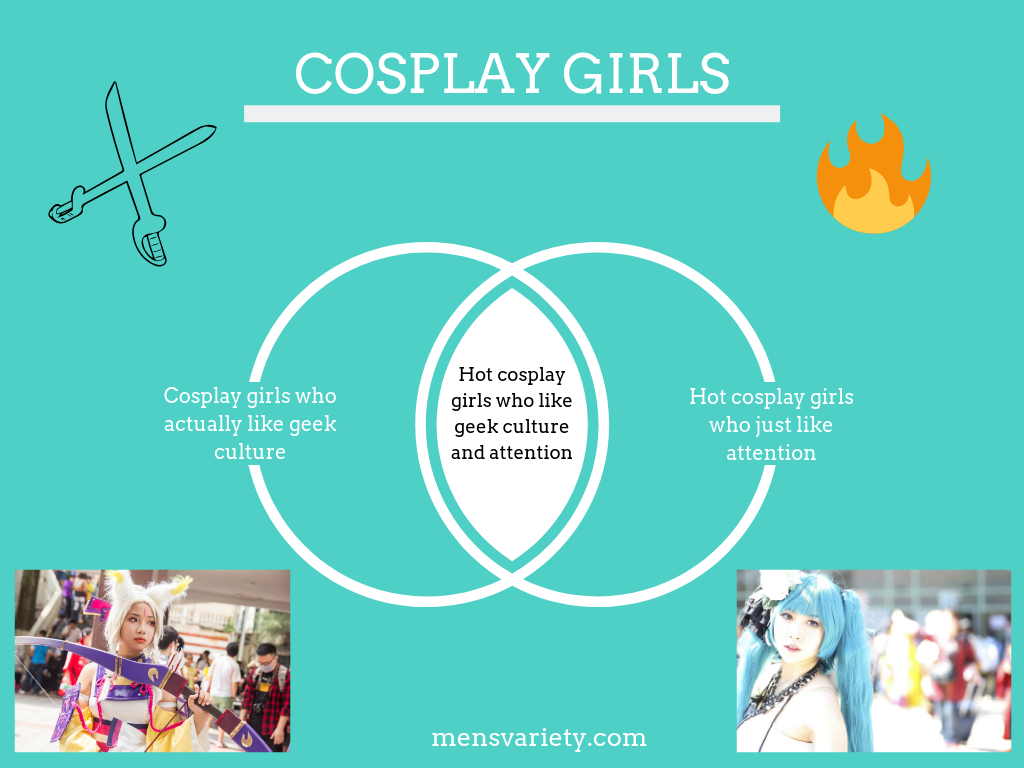 If you see a girl on the right with an incredible body and an incredible costume taking pictures and profiling at the comic-con, that girl is most likely just in it for all the jaw drops and eye pops.

She doesn’t know Supergirl from Wonder Woman. There are professional cosplayers out there who sell photos. They’re making a living on cosplay and they’re at the comic-con for business purposes. I’d advise you to appreciate her beauty, take a photo if you must, and then keep it moving.

The girl on the left is just as geeked out about the latest season of Boogiepop as you are. Unfortunately, she is also just as socially awkward as you are. She’s not packing a pair of puppies in her top either, but she can go toe to toe with you in a game of Super Mario Smash Bros. That’s the girl you should be talking to, but I know you like puppies.

You see that section in the middle of the Venn diagram. Those are the unicorns that you are looking to meet – a hot girl who likes cosplay and geek culture. These girls are extremely rare. Some might even say that they don’t exist. You could scour the convention all weekend long and not see one in the flesh.

Let’s assume that you did though.

You first step is to stride right over and tell her that you like her costume and the character that it represents. If you don’t know the character, just ask.

Don’t tell her that she’s so hot. Don’t scan all over her body with your eyes like the damn Terminator. Just complement her choice of costume. Pick a small detail that you like about it. You can even go so far as to ask whether she made it herself. Then, just walk away.

Wait a minute…I know what you’re thinking, but that’s the play.

Repeat this first step with as many cosplay girls that you like at the convention. You’re playing the long game here, so there aren’t any level one cookies for you. Sorry, you’ve got to gamify this thing and level up to get the win.

At most comic-con events, you’re going to bump into the same people over and over again. You’ve got to go with the flow. Just try to focus on the things that you enjoy the most and most likely you’ll see that cosplay girl again.

This time, you say hello and ask her if she’s enjoying the convention. She’s gotten a chance to see that you aren’t a creep and her guard is starting to come down. If she likes you, then she’ll pick up a bit of conversation.

Resist the urge to tell her how hot she looks. Think it. Don’t say it.

Now, tell her how you’re finding the convention and mention something you’re looking forward to seeing. Ask her if there’s something she’s especially interested in seeing or doing. If you’re familiar with the answer, talk more about it. If you’ve never heard of it, then ask her to explain it to you a bit further.

Oh, my goodness, you’re almost there.

Now, give an approving nod of your head to her knowledge and interest in geek culture. Complement her on her taste of shows, books, or characters that she likes.

Then, ask her if you can take a picture. Don’t take a picture of her. Take a picture with her. Say – “I’ll tag you on my social media. My Instagram (Facebook) is…My name is ….by the way. What’s yours?”

Well, that’s all you need to do for the convention. After it’s done, head over to your social media of choice and find your unicorn. If you don’t remember her name because you were so damn nervous, just look at some hashtags for the event and she’ll most likely pop up.

Send her a direct message and reintroduce yourself. Ask her if she’s watching, reading, or playing that thing that you both talked about at the convention. Then, feel free to talk about cosplay.

According to a survey conducted by the dating app Zoosk, people who mentioned cosplay in their dating messages got a 59% increase in their reply rate.

No matter what the reply, ask her if she’d like to talk about cosplay and/or geek culture more in person. Suggest something like a cup of coffee at first, but this could just as easily parlay into a movie or a trip to the comicbook store.

On your first official date, then you can tell her how incredibly hot she looked in her costume. You’ll get lots of cool points for waiting. You see, she didn’t know whether you liked her because she was a geek, or you thought she was cute. It’s probably been driving her crazy the whole time and that’s a good thing.

Now, you should be well on your way to deepening your connection with your favorite cosplay girl. I hope things work out for you in the end and I’d really appreciate it if you send me a message to follow up.

Cosplay girls are nice, but don’t stop trying to talk to girls who might not share all your same interests. It’s all about mutual respect and shared values when you get right down to it.

If she’s not into the X:Men, but she’s willing to watch the whole film franchise with you over the weekend, then she’s a keeper, too. She’s displaying respect for your hobbies even though she doesn’t share them. Dare I say – that’s called love.

Just something to think about.

How to attract women to you magnetically

Wrong to date my ex's twin?