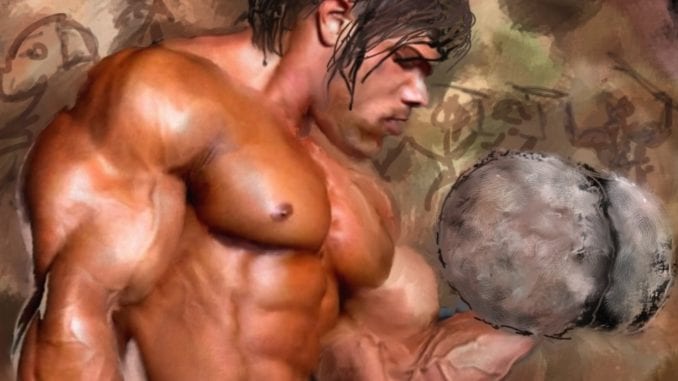 Not long ago, we had a conversation here at the blog about what life might have been like for cave gays. Oh, haven’t you heard of that term?

Cave gays are the affectionate name some have given to the earliest bipedal homosexuals. Scientifically, this species of man is referred to as Homo Heidelbergensis (HH).

We’re not saying HH was gay. Instead, we’re suggesting that if there were cavemen that had same sex attractions, it likely happened among this hominid group.

HH walked the earth some six hundred thousand years ago during a period of time called the middle Paleolithic era. In school, your teachers may have referred to this as the stone age.

Contrary to what’s depicted in popular culture, cavemen weren’t around during the time of dinosaurs. For those hoping to hear stories about hungry Jurassic bottoms, we’re sorry to say it never happened.

FYI: The dinosaurs died 65 million years before mankind showed up on the planet, towards the end of the Cretaceous Period.

That said, there were likely gay cavemen. What’s more, there were probably Paleolithic tops and bottoms. Shoot, there could have even been versatile cave gays.

So what was hooking up like for these hunter gathers? Did they breed each other in caves, engage in group play and feed off one another’s manjuice?

The answer to that question (to a lesser or greater degree) is something that puzzles anthropologists. Most researchers feel sex was a primal function of mating back in the day. To our knowledge, there were no formal laws. Religion didn’t exist either.

Our best guess is that most tribes of the era were led by an alpha male. One has to wonder if (as a sign of respect) the alpha was serviced by the others, meaning cavewomen and men.

Imagine for a moment that you were a gay caveman.

Draining out the alpha was probably awesome! If you weren’t gay and gravitated towards the females, it still was probably OK.

So what if there was a gay alpha? Seriously, just for a second, envision that. Would he have mated with other members of his tribe to procreate? Or instead, would he have commanded his submissive members to do his dirty work?

While they were off procreating, did the alpha pull a few of the hotties of their work detail for a quick group? Hey, it could have happened. Remember, we're imagining here.

In any event, assuming there was an alpha gay caveman, he probably wasn't closeted. The only way alphas become alphas (in all animal species) is through skill, size and brute force.

Maybe the alpha was into muscle worship?

The truth is we really don’t know much about early man, let alone gay cavemen. We’re just not there archaeologically or anthropologically.

But it’s safe to say homosexuality has been part of this world since the earliest primates showed up on the geologic time scale. We think that was sixty-five million years ago.

By the way, what did gay cavemen use for lube? 🙂