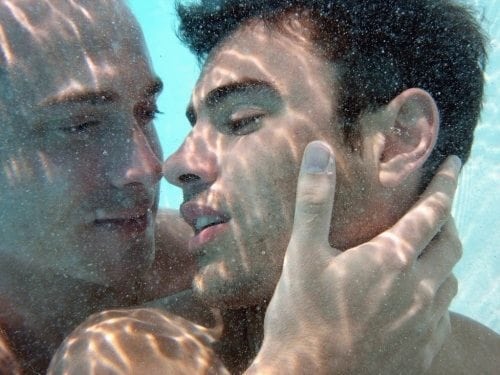 We didn't plan it this way but ended up having an awesome time!

Have you ever wondered what it's like to stay at a gay, clothing optional resort with your boyfriend? Does the idea seem crazy yet strangely hot – all at once?

Well hang tight because I'm about to give you the real deal guys. No B.S.

I’ve been with my man for over 15 years. The first time we stayed at a clothing optional establishment was in the 5th year of our relationship.

And it happened somewhat by accident.

You see, our travel agent was supposed to book us at a chain hotel in Palm Springs over Memorial Weekend. But because of a communications glitch, he reserved the wrong dates.

What’s more, we didn’t find this out until after we had arrived in the Golden state. Talk about surprised!

To make matters worse, we quickly discovered there was zero occupancy in town – we’re talking nada. That’s because hotels in Palm Springs fill up months in advance for the holiday.

The good news was the desk agent who informed us of the booking erro was “family”. He made a quick phone call and then asked us in a hushed voice: “If you two don’t mind staying at a clothing optional resort, I can get you in at a place nearby.”

For years, we had talked about what it might be like to visit such a place but were too chicken to do it. However, given the circumstances, we were totally down.

Minutes later, we were on our way in our rental car to Warm Sands Road. In case you don’t know, that’s the part of Palm Springs where many of the “guest houses” are located.

via GIPHY
I’m not going to give you the name of the resort because this article isn’t designed to be an advertisement. What I will tell you is the place we stayed at is well known for its sexually charged atmosphere.

After checking in, we knew we were in for some fun when we found samples of lube and assorted condoms waiting for us in our suite.

That – and a half dozen men of different ages chilling out at the pool with nothing on. Hey, a few of those guys were extremely hot!

Our room was nice. It had a small kitchenette, a nice living room and a decent sized bedroom. Oh, did I mention our suite was located right next to the steam room? Yep, it was.

Anyway, once we settled in, dusk was upon us. We decided to head out to grab some food and then stop by a grocery store for basic supplies. Water, pop, snacks – boring crap like that.

Upon returning, the resort had transformed into a bathhouse. Seriously, it totally had.

There were guys doing oral in full view on the lawn chairs. And the ones that weren’t hooking up were watching the guys who were.

You may be wondering if we paused to take in the view.

YES! And it was awesome! There’s just something cool about watching guys go at it outdoors, uninhibited under the stars.

After some discussion (and getting turned on) we decided to get undressed and put on some towels. You see at this particular resort, it’s was required you wear one when walking the grounds.

While changing in our room, we made the mistake of leaving a window shade open. I say this because at this place, it’s common practice for strangers to press their faces up against a window and peep inside.

The light from a guest room – any room – acts like a magnet.

Later, we would find out that it's customary for people to leave their doors unlocked, allowing strangers to walk in if they dig the scenery.

Like I said – this place was basically a bathhouse. But I digress. Back to the experience.

Once toweled up, we went out again and started walking around. It didn’t take long for us to stumble onto a dimly lit space called “The Sling Room”. Essentially, it was an old suite that had been repurposed for hooking up.

Inside, there were mirrors, glory holes, saddles and yep, slings! Along a wall, there was an ancient, 19-inch television that looped adult video in black and white.

We probably stayed all of five minutes. Not that we were disturbed by the crazy fun we saw.

Instead, it we left because it stank to high heaven!

Between the smell of poppers, cigarette smoke, and various liquids on the floor, we could hardly breath.

Once outside, my man suggested we head into the steam room. I suspect he was motivated by curiosity. And if truth be told, I was too!

So that’s what we did.

We were shocked at how big it was. I don’t have the exact dimensions but it had to be something like 600 SF?

After finding a place to sit down, we could see all sorts of things going on through watery vapors.  I won’t go into graphic detail here but topping, bottoming, and oral were happening – all around us!

The both of us got extremely turned on. I know this because my man’s banana went to full attention. Shoot, mine did too!

And while it would have been easy to join in on the fun, we decided against it. The truth is, we were both completely exhausted.

Plus, we just weren’t there yet in our relationship.

Sure, we had played around with a third in the past. But it was always with someone we knew. Making the leap to anonymous NSA wasn’t a bridge we had crossed. We still haven’t.

That doesn’t mean we weren’t down for watching the action!

And can I tell you something?

The two of us had the hottest sex while we stayed at that this place. Maybe it was the visual stimulation? Perhaps it was the sexual energy? Hard to say.

Example: We had never watched Sean Cody vids together. Not even a little.

But at the place we were staying, they piped it right into the room like the shit was Netflix. It was so fun chilling out on the bed with my man as we stimulated one another.

For the rest of our short stay, we repeated much of what I described above. We even messed around with each other one night with the shades open as passersby looked in.

Oh, and there was that time we made out in the pool and had some underwater fun.

Yes, we put on shows.

Judge us if you want but that’s what we did. And it totally rocked!

By the time we checked out, the both of us felt completely chillaxed. But we also knew it was time to go.

In closing, it’s important I say that not all clothing optional resorts are like the one I described above. I know this because in the years that have followed, we’ve stayed at several and most are pretty boring.

If you and your boyfriend/husband are thinking of staying at a gay resort, I encourage you to do some homework well in advance. Read reviews and check around.

If you play your cards right, you could end up having the best time of your lives!

Thanks for taking the time to read!