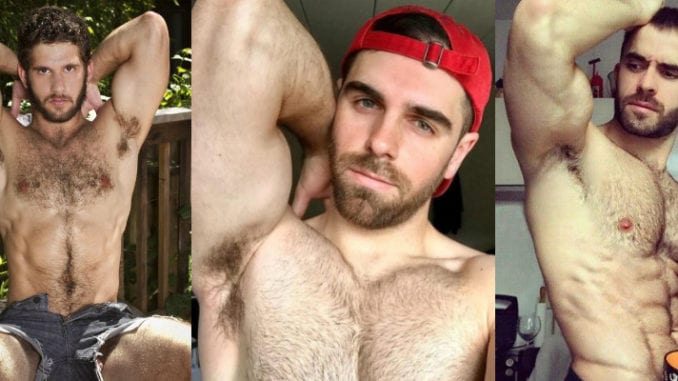 We live in such a sanitized world, don’t you think? Groom this, wash that and oh by the way, make sure it all smells good after lathering up.

I can only speak for myself but I’ve kind of had it with the sanitation police. In truth, I LOVE the smell of a man’s sweaty body.

No, I’m not into rank BO but a semi-strong manscent really turns me on!

Because I know I’m not the only gay man that gets into the yummy dude smells, I thought I list out 5 common reasons manscent is like aerosol Viagra.

To the best of my ability, I’ve tried to include science as part of the dynamic.

When a guy sweats, that’s a good thing! It means his system is working correctly and purging toxins from his body.

If the we weren’t equipped with sweat glands, carcinogens would accumulate and eventually kill us. Seriously, it’s true. Part sweat’s magic is how it helps to eliminate waste through thermoregulation.

I like to think of it as mother nature’s purifier. Just thinking about it now works me up. Seriously, who needs a pill to get your wood going when you’ve got a nice armpit to smell!

There is science to manscent.

Specifically, it’s all about androstanol. That’s the clinical name for freshly made sweat containing pheromones. And research says it acts as a sexual magnet!

Is it any wonder why so many guys get into armpit sniffing?

3. Gay men may be wired to sniff

As crazy as this may sound, there is real scientific evidence to suggest that gay men are wired to smell differently than our heterosexual counterparts.

Swedish scientists found that gay men and straight men responded differently to two odors thought to be involved with sexual arousal. The findings suggested that gay guys respond (as in being turned on) in the same way as women.

You can read the entire synopsis of the study in this very well written New York Times article.

Did you know that each of us have our own unique smell? When you think about it, this makes sense.

Have you ever sniffed the jock of a guy you dated or had a crush on and thought to yourself, “Wow, this smells like …?”

The reason for that.

It’s because his highly unique manscent is resonating with your olfactory bulb. That’s a fancy name for a group of nerve receptors in your nose that are responsible for picking up scent.

The stronger the odor, the more of a turn on it can be. This is why some guys “smell” hotter to you than others.

The final reason a guy’s manscent is a turn on relates to domination. You may be wondering what this means? Well, it’s pretty simple.

A guy who has a masculine, powerful scent is literally broadcasting the message, “I am man!” Regardless if you are a top or bottom guy, the primal message that’s being broadcast is unmistakable: I’m in control.

To me, that’s just ridiculously hot!

I’ve tried to lay out my case as best I can about why a guy’s body odor is such a turn on.

Hey, don’t get me wrong. Men who wear aftershave and colognes don’t offend me. It’s just that I prefer to smell him in an up close and personal way – stank and all.

Just for fun, I’ve included a poll below that asks you about a dude’s manscent. Are you into it?