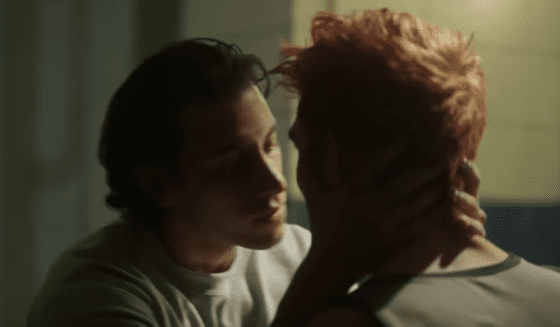 To answer the title, probably.

Young Adult drama Riverdale has gotten a lot of press in the last few days because of the recent promo for an upcoming episode. In it, you can see a quick kiss shared between the show’s main character Archie (played by KJ Apa) and another character named Joaquin DeSantos (Rob Raco).

As much as many gay news sites have circulated this video to get clicks, not many are asking the real question. What’s going on here?

Gents, I do not watch Riverdale, so I can’t give you an in-depth analysis of what could be happening in this scene, but I can tell you what I do know. Archie Andrews is straight in Riverdale’s depiction of the character.

Let’s be honest, the series isn’t going to turn its main character bisexual (no matter how cool that would be). Probably what is happening in this scene is that this other character played by Rob Raco is gay and kisses Archie (which we can see in the promo). What the promo doesn’t reveal is that Archie will probably pull back and go “no homo” (or something nicer, of course).

This quick shot of a gay kiss between two men is just a taboo/sensational plug that was dropped into the promo by marketing to get people talking. And let’s face it, we’re doing it.

While I may be criticizing the whole situation around that 5 second kiss, I’m still writing about it. On top of that, many other gay sites are just writing about it to write about it without even questioning whether this is queerbait or not.

On top of that, the very scene was probably written in by the writer’s room to entice viewers with a gay kiss between Archie/KJ Apa without committing to actual gay representation.

Of course, maybe the other side of this kiss (Jaoquin) will amount to actual gay representation. Once Archie rejects him, maybe the character will go on his own journey as an LGBTQ person.

But that doesn’t stop the fact that this kiss is as empty as a 1am “You up?” text.

So at the end of the day, enjoy the kiss scene for what it is. A chance to see KJ Apa kiss a dude. But at the same time, don’t play right into Hollywood’s tricks by getting excited for it.