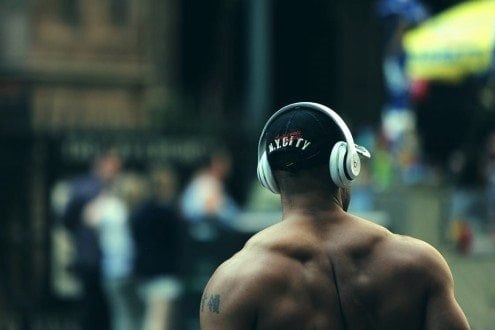 He tried to top me so fast that it went in the wrong way. I felt horrible for him.

By: Buck B NYC

When I was 21-years old, I fractured my boyfriend’s penis.

We had been drinking some cheap wine and hanging out in my studio. If you’ve ever been in the honeymoon stage of a gay relationship, you know it’s all about cuddling while frequently exploring one another’s bodies.

It was wintertime in WEHO, which for native southern Californians means brisk. Still, we kept the window ajar to let in the cool, fresh air. There’s nothing like snuggling under a blanket when it’s chilly out, you know? I can still remember the hum of traffic in the distance.

One evening, we spent an entire night looking out that very window, counting airplane lights as they streaked across the blackened sky. Romantic, huh?

We were introverted gays, happy to just be with one another and watch reruns on T.V. Land In between, we’d have long, spontaneous sessions and then treat ourselves to Raman Noodle soup afterwards.

Until that dreadful weekend happened.

As to the specifics of how this went down, I can’t remember. I do recall: It was late at night. We had turned off the television. He took his glasses off, which basically left him blinded. The only light that came in was from a streetlamp, which cast off a yellowish, cream color hue.

We had been touching each other non-stop for a good hour. Not all that uncommon. It’s all part of the spooning thing, if you get my drift.

At some point, he grabbed a bottle of lube sitting on the table and coated his wood. Not wanting me to feel left out, he did the same to mine.

Suddenly, he got super aggressive and turned me over on my hip, thrusting his business inside of me with a mighty force; so fast that my brain hadn’t registered what was going on.

I fumbled in the dark for the light switch and to this day I wish I hadn’t seen what I had seen.

His rocket was slightly deflated and crooked, looking completely not what a penis should look like. There wasn’t blood or anything but you could see it was starting to swell like a balloon.

“Oh God – where are my glasses? Where are my f—king glasses!”, he said. It feels like someone slammed my dick in a door!”

Like I said, this was late at night. “Should we get you to the hospital? It looks really red.”

He then started yelling about not wanting to go to the ER or having the money to pay for it. As we both watched as his crooked membrane throb, my instincts somehow kicked in.

“I’m going to make an ice pack. It might help with the swelling. The neighbor is a hospital nurse, should I get her?”

As I wrapped the ice in a washcloth, I remember him saying, “Yeah, that’s cool. See if she’s home. Maybe she’ll know what to do.”

So that’s exactly what I did. Once he started cooling his privates, I threw on a pair of jeans and a t-shirt and went to see if my neighbor was home.

“Be right back baby – hang in there,” I remember saying. “You’re going to be just fine.”

She lived across the hall so it took all of thirty second to reach her unit. Thankfully, she was there – apparently just home from work and still dressed in her blue scrubs.

Out of all of the stupid things that have come out of my mouth, that one takes the cake. Don’t ask me why I blurted that out. I just know that’s what I did.

Once I got my bearings straight, I explained to her what had happened. She had always been very gay friendly so it wasn’t like I had to play games or anything. Plus, she had met my man several times in the hallway.

My neighbor was cool about it. “Where is he now? In your studio? Is there bleeding?”

Quickly, I rattled off my observations and begged her to come by.

She agreed and briefly disappeared to grab a pair of latex gloves. I guess nurses keep those around? I didn’t care.

Moments later, we were in my studio. By this time, I could see my boyfriend was completely freaked out. His face had gone white as he crouched on the futon, holding the cloth icepack over his peen.

There was no time for pleasantries. I remember she gently placed her hand on his to move away the pack. “Let me see. It’s OK. Let me see.”

Then suddenly, she let out an audible gasp. “This looks really bad. Are you in a lot of pain?” she asked while slipping on the gloves. “I’m going to lift it by the tip just a little.”

Just then, my boyfriend began squealing in pain. It was the kind of sound that cuts right through you – and is terrifyingly haunting.

After she inspected it, she stepped back from the futon and looked at me dead in the eyes. “You need to get him to the hospital right away. It looks like a fracture. What happened?”

Briefly, I explained the events leading up to the accident but in PG rated format. “…and it just snapped,” tossed in my boyfriend with a pained voice.

Somehow, we managed to get him to the ER with my neighbor offering to drive. She had wanted to call an ambulance but he said he would have rather died than face the embarrassment.

When we pulled up to the hospital’s entryway, he could barely walk. I remember a wheelchair materializing at some point as we rolled him into the triage station.

They took him right away and did a bunch of tests. One of them was a urethrogram, which is a special x-ray of the tubing that you pee out of.

The next day, he was in reparative surgery to correct the damage. And it would take months before he was able to use it again in a sexual way.

From near as I can tell, when he was trying to top me, he penis went in at the wrong angle. It’s called “misaligned penetration”. My understanding is that it’s not very common but does happen sometimes.

If you are curious about what something like this looks like, here’s a picture from Wikipedia. Mind you, this isn’t him. I’m just showing you this as a frame of reference.

After he recovered, we tried to reignite what used to be. But the magic never seemed to come back. Part of the reason is that both of us were afraid of a repeat accident.

Not that you can get dick related PTSD or anything but that’s really the only way I can describe the emotional aftermath.

For a long time, I lived with extreme guilt about what happened. In the here and now, I realize this it wasn’t my fault. But back then, I blamed it all on me. It’s a guilt trip for sure and I wondered if my hole was somehow toxic. A dick killer.

It’s been 15-years since that happened. I’ve lost track of my former boyfriend. For all I know, he could still be living somewhere in LA. I’m in NYC now so I doubt I’ll ever run into him again.

If you ever have anything like this happen, don't mess around. Get yourself or your partner to the hospital right away.

Thanks for reading and I hope I didn’t gross you out.

Do you have a first hand story you'd like to share? Make a pitch to our blog! See our pitching guidelines here.