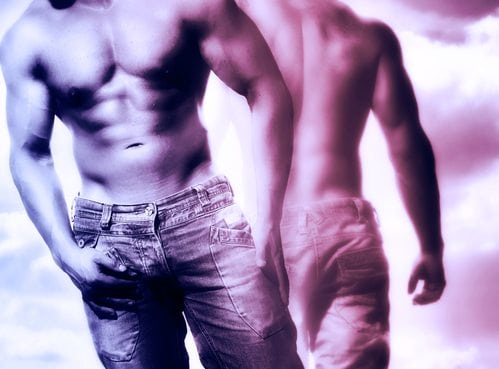 He has a rule – eyes have to be covered

By: Nate in the Midwest

There’s no easy way to say this except to just blurt it out. I’ve been sleeping with my straight roommate since going into lockdown.

It’s not like we planned this or anything. I’ve been living with Mike for the past year, which pre-dates COVID-19. But due to the rules involving social distancing and non-physical contact with others, things just kind of happened.

Now before I dive too deep, I need to say right now things aren’t like you might think. Mike has put special rules in place.

A little background. I’m twenty-five and identify as bi. My roommate – Mike – is 24 and identifies as straight. We live in the Midwest and share an apartment together in a large metropolitan city.

Prior to going into lockdown in March, I was employed as a sales manager in the transportation sector. For his part, Mike worked as a personal trainer and fitness coach.

We’ve always gotten along well but, I can’t say we were ever close. Well, at least not until recently.

How It First Happened

On the very first day of the mandatory shutdown, Mike’s gym closed. I was able to hang on to my job for a week, but ultimately got furloughed due to lack of demand.

Both of us are single, with Mike breaking up with his girlfriend shortly after the New Year. I don’t know why their relationship collapsed but, I think it had something to do with communication issues.

During the entire time we’ve lived together, Mike has never once shown an interest in men. And to keep it real, I can honestly say the guy is as straight as they come.

To give you an idea, his hobbies include duck hunting, NASCAR racing, and non-stop ESPN. Not that I don’t get into sports. I do. But he’s obsessed with it to the point where it is annoying. And to top things off, he played soccer and basketball.

I digress but I think you get the idea.

During the first couple of weeks of lockdown, we tried passing the time like a lot of folks do – Netflix, board games, and super long walks to get in cardio.

Mike even started showing me ways to workout using resistance bands and a kettlebell. Kind of cool, huh? During these training sessions, we got to know one another better and in ways that I can’t explain, increased our level of trust.

At any rate, a few weeks ago, on a Friday night – Mike busted out some 420. This wasn’t a surprise because in the past, we’ve shared a smoke together.

But on this occasion, things were different.

It was around 9 pm. We were blowing clouds and watching The Oath on Crackle. As things got cloudier, my ability to focus got blurrier.

Not in the psychedelic kind of way but instead, just more detached – know what I mean?

He started talking about wishing he could hook up with women and was tired of the whole social distancing thing. In my own way, I revealed I was struggling with the same thing.

And yep – Mike knows that I’m bi but has never been judged me on that.

So, there we are, smoking and talking. At some point, he leaned back into the couch and clasped his hands behind his head. That’s when I noticed what was going on in his shorts.

I won’t go into graphic detail here except to say that it was massively obvious. When I told him he was showing, Mike literally turned to me and said, “Dude, I wish you were a chick.”

Look, I’m no dummy. I’ve been around long enough to know about a brojob request. A moment later, I said, “What if we pretend that I am?”

At first there was an awkward silence. But then, after taking a super deep toke, Mike replied, “Cool man but I’m covering my eyes.”

That’s when he grabbed a homemade bandana-facemask and covered his peeps.

The first time it happened, I can still remember feeling super nervous sliding down his blue shorts. Was he going to deck me? Was he just kidding? Would he wig out?

In the end, he was being dead serious.

Much of what happened next is a foggy blur. I remember some quiet moaning and grunting. For the most part, he kept his hands clasped behind his head.

When he released there was no warning. He just did it.

When we were done, I do remember him giving me a fist-bump and saying, “Hey dude, it doesn’t count if you can’t see what’s happening.”

I remember thinking it was kind of messed up but went along with it.

In the days that followed that first incident, I worried about our friendship turning awkward. If you’ve ever gotten with a guy who identifies as straight, you know what I mean. Things can turn south real fast.

But honestly – that’s not what happened. At least not yet. I think in part this is because we’ve both pretended like it never happened.

Well, that is until it happened again. And then again – and again after that.

Recently, there has been a turnaround of sorts. You see, I had resigned myself into being the one doing who was doing the servicing. It’s not that I mind. I’ve always found Mike attractive.

But a few nights ago, while watching some rerun-on TV and getting cloudy, he told me to put on the facemask. At first, I was kind of freaked out because I wasn’t sure what he was up to.

And so, there I was, sitting on the couch in my grey sweats and pulling this bandana over my eyes. “No looking man – got it?” he said with a seriousness in his voice.

Before I knew it, he was doing his thing. I’m not going to say he was good at it. It was just the opposite. I had to tell him to open his mouth because his teeth were scrapping on me.

In the end though, he got me to release – but wow it took a lot of work.

“Just do it dude – it’s your turn. Take a toke and put on the mask”

The Here and Now

I have no idea how long this whole quarantine thing will last. At the time of this post, it seems like this could go on for many weeks, perhaps into summer.

I know that other people are figuring out how to have a sex life while navigating COVID-19. In fact, it’s a topic that has come up on a number of blogs.

There’s a part of me that wonders how our relationship will change once social distancing is over. Can Mike and I really go back to being simple roomies? Will it feel weird the first time he brings a girl into our apartment?

For now, I’m just going with the flow. My sense is that both of us are just glad to have some physical contact and a way to release – even if it means being childish and wearing blindfolds.

The good news is I don’t have feelings for him. Well, at least I don’t think I do. Time will tell, I guess.

Do you have a roommate? Have you been getting closer since the lockdown?

25 stories of straight men who got curious

I'm sleeping with my husband's brother

Should I sleep with my straight roomie?