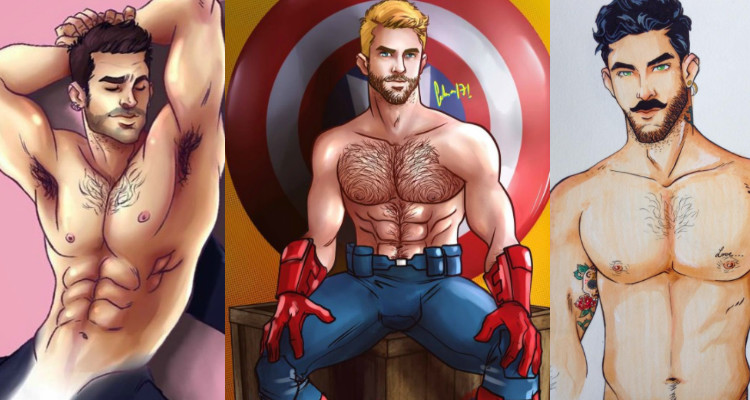 Those drawings, sketches and doodles have real meaning.

Are you a doodler? Do you ever find yourself drawing out your fantasy man? Have you found that over the years, the same guy shows up in your doodles in various forms?

Guess what – there could be a reason.

Historically, doodling has gotten a bad rap. Many view this activity as a waste of time. “Stop doodling around Johnny and get to work!” I was often told as a child.

In truth, doodling has many therapeutic benefits. It’s considered a form of expressive art (Schott, 2011). Creativity, idea generation and catharsis all happen when you sketch out those funny shapes and faces.

Not to be monolithic but most of us who identify as LGBTQ are deeply in touch with our creative side. In fact, I’d argue that as a tribe, we are gifted with a unique “chip”.

But how can you use it to snag a man? Hang tight and I’ll tell you. First things first.

In their most basic form, doodles can be thought of as non-verbal messages that pop up from the unconscious mind. Often, they symbolize thoughts, feelings, and perceptions in visual form.

Researchers discovered that men typically draw geometric shapes, like circles and rectangles – whereas women sketch out faces. Folks that happen to be gay often create something fantasy based (Ellis, 1959).

Regardless, many in the behavioral sciences view such drawings as conduits to the hidden self.

So how can drawing my fantasy dude help draw him near?

Obviously, if you are sketching out images of Chris Evans or Zac Efron, hoping they’ll magically show up, you’ll be waiting a long time.

That said, if you follow the law of karmic attraction, you’ll find that what you put out into the universe has a way of boomeranging back.

For example, if you’ve been drawing bearded men with tats, that’s your mind’s way of reflecting out the fantasy guy that lives inside.

What’s important is to remember that the doodles/drawings you create should be viewed through the lens of symbolism. In other words, it’s what the images represent.

For instance, a muscled-up prince might speak to a long-held desire to channel stability. A hairy chested superhero could represent a hope to be rescued.

Doodles often speak to abandoned parts of the self that need to be focused on.

The more you get in touch with those aspects, the more likely you are to become the fantasy man you so badly desire. And since we attract what we project out into the universe, you will … eventually … draw him near.

You see, that guy you’ve been drawing is you.

So, there you have it folks. Doodle your heart out! But when you are done, look for themes and metaphors. Those are the areas you’ll want to work on. The more you strengthen them, the better.

Before you know it, your fantasy prince charming will be knocking on your door.

But when it happens, will you really want him? 🙂

Photo Credits: Art By Fab (a friend of MV!)

About MJ Booth 108 Articles
Based in Los Angeles, MJ is a journalist and blogger who covers the LGBTQ community. Identifying as gender-queer, MJ focuses on topics that touch on a variety of life issues impacting men, women and non-binary individuals. Look for posts on science, dating, relationships, and culture.