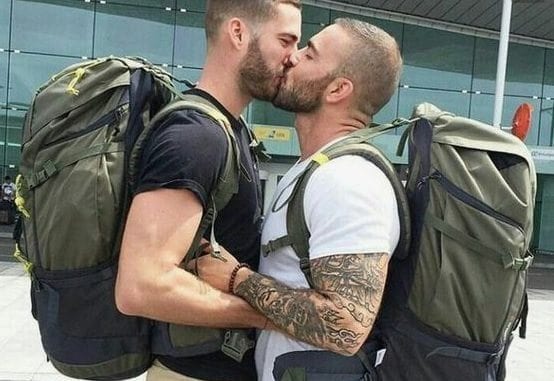 There’s nothing quite like hearing the words I love you from a man. I’ll never forget the first time my guy said it to me. Just thinking about it now sends chills down my spine.

And that was over 25-years ago.

But here’s the thing – as time goes by, words have a way of becoming less powerful. It’s just a fact of life.

In gay relationships, we are both blessed and cursed. The blessings come from living in a time where same sex couples are largely celebrated.

The “curse” part comes from being oppressed for decades, thereby making it difficult to identify healthy forms of romantic communication.

Here’s seven ways that require no words. Obviously, there's more. Think of these as the “biggies”. Guys, what I am about to share is the real deal. No BS.

When a man wraps his arms around your body– meaning all of you, pay attention. He won’t paw at your privates or grab at your butt. Instead, he’ll embrace your body with affection.

Clear you mind and allow yourself to dial into his energy. If you feel a gentle warmness – a tingle, you can rest assured that’s his love.

He’ll look you right in the eyes, place his lips on yours and stare right into your soul. In that moment, you will feel vulnerable and naked – all at the same time.

So powerful with this embrace be that it will rattle your core. Should this ever happen to you, bank on that man saying he loves you.

When your world goes to hell in a handbag and you feel like giving up, take note of who is around.

If there is a guy in your life who is offering comfort, letting you cry on his shoulder or simply being with you, that man is saying I love you.

4. He celebrates your success

As a tribe, gay men are competitive. This is particularly true in LGBT relationships. Some couples can’t handle the pressure. In turn, they collapse.

But the man who truly cares for another man is never jealous. Instead, he’ll celebrate a success with you because he is genuinely thrilled. You see, your happiness becomes his happiness.

And you know what else? He’s saying I love you.

If you’ve ever said something to someone out of anger, you likely know its damaging effects. That’s because once words escape our mouths, they cannot be put back.

If you’ve ever crossed a line with your man – by putting him down or lashing out – and he forgave you, you’ve got to know that man is saying I love you.

In fact, forgiveness is the ultimate form of love.

6. He’s focused on you sexually

Some men jump into bed and make it all about their them; their needs, their wants and, their desires.

The man who is into you will do the opposite. He will dial into you like a precision radio and know what turns you on. Even when you try to reciprocate, he’ll want to give you pleasure.

Pay attention to this – he’s saying I love you.

Have you ever been with a man who let someone disrespect you? Did he just sit there like a bump on a log?

The opposite is the man who defends you. He’s the guy who tells another that it’s not OK to speak to you rudely. He’s also the same man who will put himself in harm’s way to keep you safe.

If you’ve got a guy like this in your life, that man is saying I love you … big time.

So many of us get caught up in the “shiny new thing” syndrome. When this happens, we fall victim to overlooking the wonderful person we’ve already got right under our noses.

When the man in your life is saying: I love you, can you hear him?