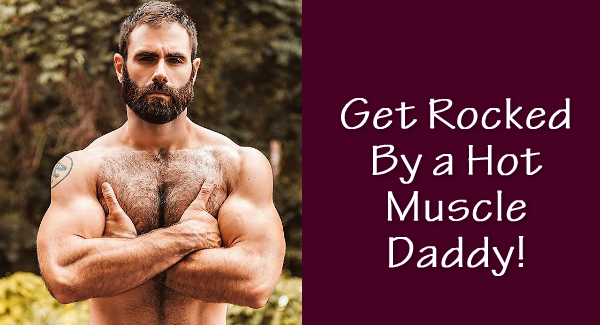 Consider this masterpiece an ode to muscle daddies.

Call me basic. Call me shallow. Call me whatever you want, but I will never stop being attracted to older, beefy, men. Throw some chest hair on that guy, and my jockstrap immediately drops to my ankles.

Let me clarify. It’s not that I’m obsessed with masculinity or any of that nonsense. I’m not a jerk who writes, “REAL DUDES ONLY” on my dating profiles. I also sleep with guys who aren’t beef cakes. (I’ll be honest with you, I cast out a really wide net when it comes to my sex partners.)

I, myself, while being more muscular and hairy, still paint my nails. I wear makeup from time to time. I shout “YASS KWEEN” when the situation calls for it.

I’d say I’m pretty evenly masculine and feminine. (And frankly, a fem guy with a hairless bubble bums also drives me wild, but we’ll discuss this some other time…)

But there’s something about muscle daddies that makes me go weak in the knees. (Especially muscle daddy power bottoms. Good lord, have mercy on my soul.)

I’ve been thinking about it for a while, and here’s why I (am so many others) are so damn attracted to big, sexy, beefcakes. Yes, obviously, it’s largely in part due to their looks, but there’s also a lot more going on than that. Take a look.

1. You just know they’re good in the bed

I’ll be honest with you; I’ve slept with my fair share of men. (That’s probably an understatement.) A lot of guys I’ve slept with are duds. They just lie there like a dead fish, expecting you to do all the work. It’s like, no. Do something.

It takes two to tango, and I’m not trying to bone a corpse. Of all my many fetishes, necrophilia isn't one. But muscle daddies are active sexual partners. They are not lying there. They get into it. They get into you. They’re more passionate and more pleasure-centered.

2. It’s nice being able to hold onto thick melons

I’m a large man. 6’4’ and 180 pounds. I’m usually the “bigger” one when it comes to hooking up with guys. But muscle daddies — they may not be as tall as me, but they are definitely bigger.

And there’s something so freaking hot about being manhandled by a guy, who you know could just crush your skull. (No? That just me… ?)

Too real? (Jk… but like very serious.) I don’t know exactly what’s going on here psychologically. But perhaps Freud was onto something here. Maybe we struggle with abandonment issues, or our dad never accepted us for being gay/bi so we seek out validation from other “daddy” figures.

I don’t want to delve more into this, because I feel like the real answer may be somewhat screwed up or depressing, but I will say there’s GOT to be some oedipal desires being satiated by dating a daddy.

They are pungent group of men. Often, they are men who don’t believe in the power of deodorant. Usually, I’m not a fan of this. It’s like, why smell gross if you don’t have to. But muscle daddies. It’s like they release these invisible pheromones that are so damn alluring.

Okay, so this one is kinda of obvious here, but I feel like it still needs to be reiterated. They have muscles… large muscles. Hence the name muscle daddy. Muscles are attractive (to many of us. I know, not all.) You can’t help but want to swing from his arms. Am I right or am I right?

Alright, so this goes back to their size and fur. The two combined make them so comfortable to snuggle up with. Their fur keeps you warm. You feel protected by those football-sized biceps.

His big muscle booty is pushed up nicely against your junk. This is surely what heaven is. Cuddling in bed naked with a dozen muscle daddies.

7. You know they are hard-working, dedicated men

You don’t just turn 40 one day and wake up with a perfectly muscular body. In fact, it’s more likely that the opposite will occur: You wake up one day and realize you don’t have the body you used to.

These men have been working their glutes for years, which is why they look so hot. If that doesn’t deserve respect, I don’t know what does. And it’s like, who isn’t attracted to hard-working, driven men?

8. Knowing that one day, if you work hard, you too can become a muscle daddy

Muscles daddies are inspirational, and no, I don’t use that word lightly. Whenever I look at them, the first thing I think is, “I would literally murder a toddler to be inside of you right now.” But once the excitement fades off, I think to myself, I could be like him.

If I treat my body right, cut down on my drinking, and work on my abs, I can one day be a daddy.

There’s something beautiful about that. It’s like the circle of life, only the circle of daddies. The daddies move onto to the next world, and then we, the people, the common queers, rise to the status of daddyhood.

So, thank you muscle daddies. Thank you for being you and for being beasts in the sheets and for giving me gobs of spank bank material. You definitely do not go unnoticed.