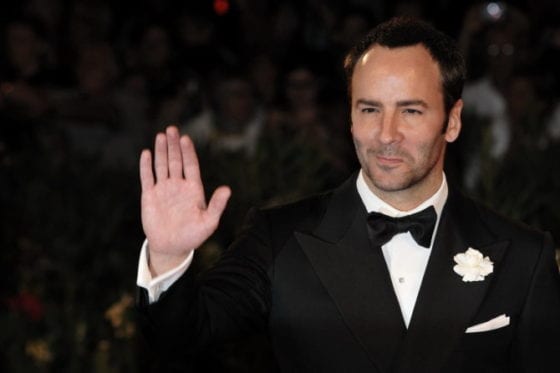 What’s better than having the man of your dreams all over you? Wearing him. Wow, that sounds a little bit creepy but since it is Tom Ford we are talking about, you can get what I mean.

At the age of 55 and with a net worth of almost 70 million dollars, Tom Ford sounds like the perfect sugar daddy, but the truth is that he is much more than that.

As a talented fashion designer, a sophisticated art creator, and an Oscar nominee, Tom Ford is both someone you can analyze ancient Greek philosophy with over a glass of wine and have fun in bed with.

I mean, have you seen him?

So, let’s start with our eight facts about the one and only Mr. Tom Ford!

1. Tom Ford Was The Most Mature Kid Ever Born

At the age of 5, when most kids play with a ball or their Barbies, Tom Ford was planning his future ahead. As he says, when he was five years he wanted to be fifty. He knew what he was going to look like and what he would do for a living (although there was this time when he wanted to be either an actor or a cosmetic surgeon).

He never felt like a kid and, instead of hanging out with his friends, he wanted to go at his parents’ cocktail parties.

He even wore a suit and carried a suitcase in third grade. Stylish men are born, not made!

Two things he got wrong. The first one was his gray hair at his temples and the second one that he would be living in a fancy apartment in New York. Today, he dyes his hair and he can’t even imagine how living in the Big Apple would be.

2. He Also Knew Who His Husband Was Going to Be

Okay, guys. This is getting serious. I am starting to believe that Tom Ford is actually psychic and he could predict all the upcoming fashion trends to make millions. He even knew the man he was going to marry. I mean, isn’t this scary?

Tom was 25 years old when he met Richard Buckley. Right from the start and after an elevator ride, he knew he would spend his life with him. “The first night I ever had drinks with Richard, I felt I knew everything about him,” he says.

Tom and Richard have been together for almost 30 years.

Okay, he used to hit the gym regularly, but for the past two and a half years, he has not worked out once. However, he hasn’t neglected himself completely since he takes care of what he eats and drinks. But, as he admits, he is also lucky genetically.

Tom Ford is the same weight he was 20 years ago and weighs himself every single day. If he gains more than three pounds, he goes on a vegetable-based diet.  This is his secret to remain a sample size.

Additionally, after he became a father, he came to terms with his age and stopped getting Botox and fillers. Ah, don’t you just love this man?

4. He is a Workaholic. Seriously

There was one point when Tom Ford run both Yves Saint Laurent and Gucci at the same time. He never complained, he never felt like he had too many obligations on his plate. Simply, because Tom is a workaholic. A real workaholic.

Related: 10 Facts About Jamie Dornan That You Might Not Know

“If I’m awake, I’m working,” he says. Non-stop. However, in 2004, the designer and director left the Gucci Group and his life took a complete turn since he openly admitted that this event left him moneyless.

But it was not until recently when he realized that, no matter how much he is attracted to beautiful things, the connection to other people is what brings real happiness.

Twelve years later and he still remains a workaholic. His own brand which includes menswear, womenswear, bath and body products, accessories, make up products, cologne, and candles, is not just successful. It is a fashion best-seller.

Oh, and for the record, if you ever want to visit a Tom Ford boutique, be prepared to spend $1,797 on average.

Yes. Everybody does, but Tom is addicted to them.

The fashion designer (who is also a film director, a screenwriter, and a film producer) used to take three baths a day, and when he felt particularly stressed he even took a bath every hour. Just imagine how soft his skin might be.

Today, Tom Ford still loves baths and grooming but he also has to chase after a toddler. Thus, he takes just one bath a day (when exactly did one bath stopped being enough?), and still feels great.

If you ever meet Tom Ford in person, he will definitely not be the celebrity you’ve seen giving interviews on television. Real Tom has nothing to do with his public image.

As he says, he is an extremely shy person who doesn’t like big parties with people he doesn’t know. “I am not someone who likes cocktail parties or large dinner parties. I am somebody who likes to be alone and see some close friends. I am a shy and introspective person,” he says. Every time Tom gives an interview or attends an event, he just performs like going on stage. This is something that exhausts him.

A perfect example that proves how down-to-earth he is, comes from the fact that he doesn’t like it when celebrities wear his clothes for red carpet events. As he’s said on Jimmy Kimmel:

“I don’t necessarily love the process. It’s not a creative process really usually, dressing actresses for the Oscars because, you know, when you’re designing you’re able to kind of figure out what you believe in and what you think the world needs right now or what women need right now. You’re literally a voice in contemporary culture with what you design. What’s worn on the red carpet has nothing to do with what’s going on in contemporary fashion. It’s really a kind of bubble of 1950s Barbie clothes. It’s quite different than what real people are really wearing.”

As a man of fashion, Tom is a real perfectionist. So, it doesn’t come as a surprise that if he doesn’t like what you are wearing, he will speak his mind.

After all, everyone would love to hear what Tom has to say about their style, right?

8. Richard Buckley, the Man of His Heart

In case you didn’t know, Tom Ford is a married man. We know, boo-hoo. The man of his life? Richard Buckley. So, let’s get to know more about their story, shall we?

When Richard worked at Women’s Wear Daily, he met Tom at a fashion show and they instantly clicked. Their first dates were kind of weird, since their best friends were in the hospital, dying from AIDS and it took them four dates to have sex for the first time.

In 1986, the couple moved in together and, three years later, Richard Buckley was diagnosed with cancer which, as the doctors told him, was likely fatal. In 2014, they got married but they had already announced the arrival of their first child, Alexander John Buckley Ford, who is now 4 years old.

No wonder they are such a great power couple!