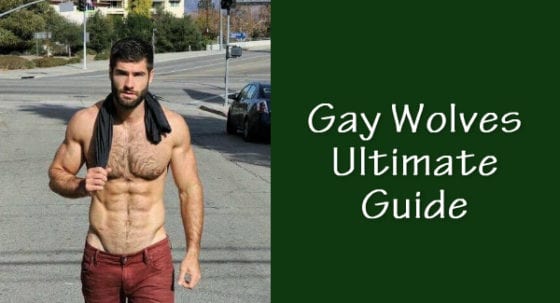 Gay wolves are a special breed of man

Gay wolves are among the most cherished group of men in our gay-o-sphere. Physically striking, they are known to give off a powerful sexy vibe that stops prey in thier tracks. Gay wolves are strong and beautiful but also deceptively cunning.

If you’ve never heard of the term gay wolf, we’re going to define it for you. And if already think of yourself as a “wolf”, or want to learn more about them, this guide is for you!

In this article, you will learn:

Gay Wolf: A man with a lean, muscular build. Usually has body hair on the chest and/or torso region. Almost always has facial hair.

A gay wolf can range in age from mid-twenties to late adulthood. They can be of any ethic background or race.

In addition to being lean and muscular, “wolves” are characteristically thought of as masculine. They can be top or bottom but are almost always assertive.

Older wolves are sometimes called grey wolves. That’s because as they age, their hair turns whiter.

GAY WOLVES: WHERE DID LABEL COME FROM?

The term gay wolf entered into LGBT subculture in the late 1970’s and became popularized in the 1980’s.

While its exact etiology remains unclear, it has been theorized that gay “wolves” are an offshoot of Gay Bears; a term that can be traced back to a 1979 Advocate article by George Mazzei entitled, Who’s in the Zoo?

The rationale behind the wolf label is pretty simple. “Bears” tend to be hairy and large. Wolves, on the other hand, are usually hairy but slimmer and more defined.

There are very few groups within the gay male spectrum that have a flag. The best known one belongs to the bears, a color scheme of stripes containing browns, greys, whites and black. Characteristically, there’s also a “bear paw” imprinted somewhere (usually upper left corner).

Because the wolf community didn’t have a flag and because wolves are considered offshoots of bears, I created a created a flag for these furry creatures in 2015. See below.

As mentioned earlier, gay wolves are typically lean and muscular with varying degrees of hair on the torso. FYI: There are smooth wolves but this is often by choice because of manscaping.

Other body traits include:

On this point, it’s important to state that wolves can also be jocks. In fact, many are. But the key thing about a wolf is his face, which brings us to our next characteristic.

Another key trait of a gay wolf is his mug. First, wolves often have angular features, meaning their faces have some amount of definition. This makes sense when you consider wolves are lean.

Second, wolves almost universally have some kind of facial hair. Examples include:

FYI: Recent research suggests that men who have the “gay wolf” look, at least facially, are considered more attractive than their smooth faced counterparts.

Remember, gay wolves are an offshoot of the larger Bear community. Therefore, an essential feature for both typologies is masculinity.

While there’s no right or wrong wardrobe for a gay wolf, you will commonly see them wearing things like:

When thinking about gay wolves, it’s important to not only focus on their physical appearance but also on the psychology. That’s because gay wolves behaviorally borrow from alpha males; a term originally coined in the 1940’s by Dr. Rudolph Shenkel.

While not universal, most wolves are sexually aggressive. This doesn't mean they are always dominant. But it does mean they go after their “meals” with gusto.

SELF CARE TIPS FOR GAY WOLVES

If you consider yourself a wolf, it’s important to take care of yourself so that you can keep your slender, muscular build. This means regularly working out, clean eating and practicing good hygiene.

We’ve offered some pointers below to help you keep what you’ve got.

If you are a younger wolf, make sure you take care of your skin, including your face. Wolves in their thirties should read this facial care guide.

If you are an older wolf (greying wolf) you can do things to preserve your attractive appearance in ways that might surprise you.

Finally, wolves, just like bears, need to be mindful of body hair. If you want to manscape what you’ve got, that’s completely up to you.

But in recent years, there has been a trend among some wolves to ditch the entire shaving thing – including the pubes – for a more natural look.

There are more male celebs with wolf features than can be named in this post. Below we’ve listed several easily recognizable ones as a way of creating a mental picture.

Keep in mind some of these guys are manscaping their chests so you won’t see a lot of fur on their pecs or torso.

Within gaydom, there exists many myths. Some of this is gossip based. But mistruths also exist because for much of our history, we were unable to record information for fear of being harmed.

And let’s face it – we’re not out of the woods yet. There still exists a sizable amount of homophobia in the world.

Back to gay wolves and myths. Here are several “biggies” that seem to circulate around the community:

Just for fun, we’ve tossed in a poll below about gay wolves. There’s nothing scientific here so consider your input and the results purely for their entertainment value.

Before wrapping things up, we’d like to address the issue some people have with gay labels. Specifically, we’re talking about members of the LGBTQ community who dislike terms like “Wolf”, “Otter”, “Bear” and so forth.

We just want to say we respect your views – truly. But we’d also like for you to consider why we think labels are important.

Basically, it goes like this. Without labels, there would be no way for groups of people with similar interests or traits to come together. This means our large bear community wouldn’t have a flag to fly under. And it also means that related groups, like DILFS and Daddies, would be left out in the cold.

In a world where gay people are becoming increasingly homogenized , it’s critical that we embrace these labels more than ever.

Labels help us to keep our once secret “code speak” and preserve our rich and proud history. That’s why we support books and other narrative accounts with wolf themes.

They say language is a key to culture. Do we really want to lose what’s left of our gay culture by doing away with the words?

We hope you enjoyed reading this ultimate guide to gay wolves. Here at the blog, we love all “types” within the larger LGBTQ spectrum.

But we’d be liars if we didn’t say wolves held a special place in our hearts.