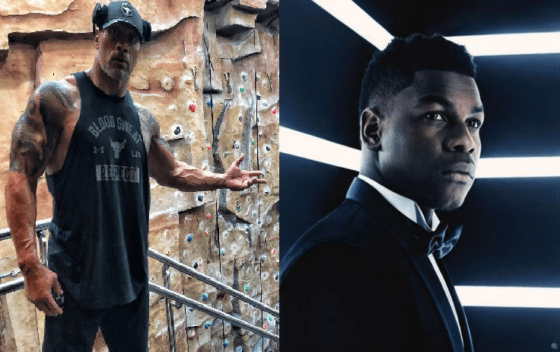 The Highest-Grossing Actors in 2017

Forbes’s list of the Highest-Grossing Actors in 2017 is out and several of our favorite Hollywood hotties made the list.

This annual list points out all of the actors who are making the most bucks for their blockbuster bangs throughout the year. Basically, it’s a list of the people who are working the most, being paid the most, and staring the in the most watched films of the year.

But the official word on how the top ten are chosen is:

“To calculate the ranking of top-grossing actors, we added up the 2017 global ticket sales of major actors’ films as of December 26th, 2017, using data from Box Office Mojo. We did not count animated movies where only actors' voices were used and only included actors who were top-billed or had the most screen time.”

But who made the cut?

First, we have John Boyega who made number 10 on the list for making a global box office talley of $815 million.

If you want to know more about John Boyega, we have 7 facts all about him.

Next, in the number 9 spot is Chris Hemsworth for making $845 million at the box office.

We are big fans of Hemsworth and love to talk about him whether he’s cuddling with Tom Hiddleston, flaunting his body on the beach, or supporting AU marriage equality.

Thank you to @therock for nominating me for the #flex4forces challenge and introducing me to "Jack and Sledge Hammer," (his arms) The Rock's not the only one who names his guns by the way. Allow me to introduce you to my left arm, Melissa. She's less of a blunt force tool and more of an emotionally supportive friend. Anyways. #flexforforces @theuso now it's my turn to challenge somebody. I choose @davebautista Give 'em hell #drax It's for a good cause: to raise awareness for @theuso which is an awesome organization. And by the way… That's a wrap on #jurassicworld

Then, there’s Chris Pratt who just one upped the other Chris with $854 million made at the box office.

If you want to learn more about him, you can check out these ten facts about the great comedian and actor.

After him came other Marvel star Tom Holland who’s $888 million at the box office earned him the spot of number 7.

We have another list of facts for those wanting to know Holland a little more.

At number five is the classic move star Johnny Depp who made $1.1 billion this year. Who else would love to clown around with this man?

Symbolic and full circle. 18yrs ago when I first broke into Hollywood, I knew nothing about acting or the business of Hollywood. Nothing. The only thing I knew and was 100% committed to was surrounding myself with good hard working people and the hard work I was willing to put in with my own two hands. I wanted to win, but I was willing to fail, because I knew that my effort was the only thing I could always control. And if I got my ass kicked and failed but gave great effort, I’d always come out the other side a better man. Here we are today, 18yrs later… these same two hands (with more callouses) touching this symbolic cement. My heart is full of GRATITUDE for my family, loved ones and everyone on my team who touches this with me. I’m a very grateful man. And we’re just getting started… #HollywoodWalkOfFame #StarCeremony #TwoHandsPhilosophy ✋🏾🤚🏾

In the number two spot is none other than social media juggernaut Dwayne Johnson who made 1.5 billion globally.

If you want to get to know more facts about the man, look no further than this article here.

Blessed to have you all in my life. Thanks for always believing in me. All love.

Lastly, we have our number one spot which went to Vin Diesel for making $1.6 billion dollars globally.

Congratulations to the Top Ten Highest-Grossing Actors of 2017. Though, we’re sure your wallets are all the congratulations you need.

PS. Despite this being a gay men’s web site, we do have to congratulate the women on the list as well. Congratulations to Daisy Ridley for placing as number 6, Emma Watson for placing in fourths, and Gal Gadot for making number 3.

About Devin Jackson Randall 516 Articles
Geek by chance, and an artist by birth. Devin is a journalist and blogger who's always glad to share insights and developments on men's issues. Aside from news stories, he often writes about the roles placed upon men by society, and how both affect the relationships around us. Click on the hyperlinked text to follow him on --> Twitter. Email him at --> [email protected]
Website Twitter